John Powell
An old goat on a rock.

Moe Howard in a turban. 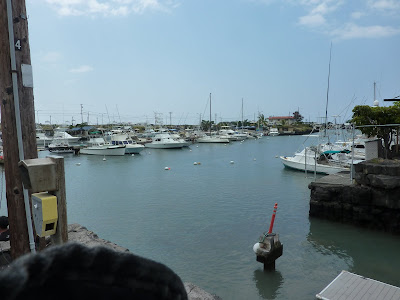 I went down to the harbor today about noon. I walked into Kaloko-Honokohau National Historical Park (which, technically, was closed) and was pleased to see that, at least in the area by the fish trap, the water appeared to have come up no further than high surf during a high tide normally does.
The harbor looked OK. The water was murky, the boats were being gently swept back and forth by the weird tides. Probably there's damage I didn't see, but it looked fine (click for larger). 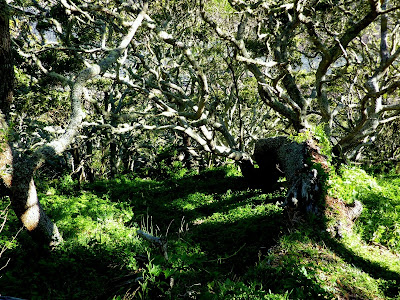 The boughs of the ancient koa grove intertwine in the afternoon sun on Pu'u Huluhulu, the native tree refuge just off Saddle Road at the intersection of the Mauna Loa and Mauna Kea access roads. The bad news in the photo is the invasive English Ivy covering thr ground and slowly making its way up the trunks of the trees. 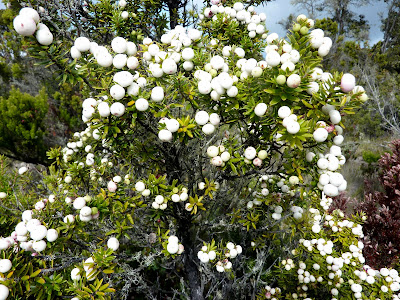 Pukiawe is native to Hawai'i, but is considered indigenous rather than endemic because it is also found in the Marquesas.

The problem with only posting every five weeks is that things accumulate.
First, a view from the Old Airport Park yesterday showing a good amount of snow on Mauna Loa, visible over the shoulder of Hualalai. 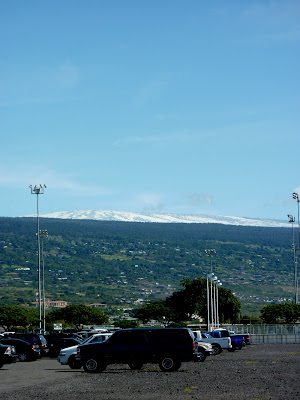 Second, an observation: Twice last week I drove out to Kealakehe Parkway in the morning. Both days there were three cars pulled over at the same time for speeding by HPD. Former Councilman Greenwell may be the entitled nutjob everyone thinks, but he was surely right about the speed trap between Makala and the Police Station/Transfer Station. It's a divided highway with no side streets, driveways, or pedestrians. The police get people there, either anticipating the increase in the speed limit from 35 to 45 too soon (going North), or reacting to the decrease from 45 to 35 too late (going South). Hard to see a public safety angle - it looks more like simple revenue enhancement.

Next, another photo of an old ranch house at about 5500' up the Palani Ranch state forest access road at the end of Kaloko Mauka Drive. I know I've posted pictures of this old place before, but I like its look. 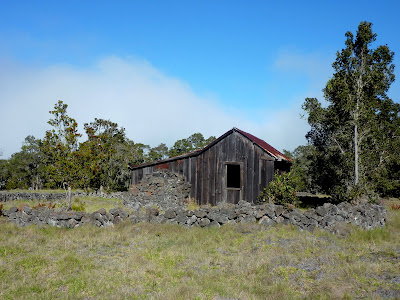 Next, the stunning flower of the "critically endangered" kokia drynariodes, planted along the trail on Hao Street in Kaloko Mauka. 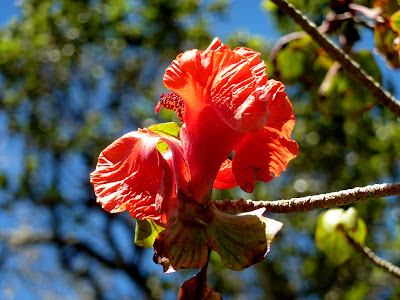 Finally, from Kaloko-Honokohau NHP, the indigenous (not endemic, apparently found elsewhere) 'Ulei or U'ulei, a member of the rose family, along with a fly from the same genus as the Hawaiian picture-wing flies, some of which (there are supposed to be 1000[!] species in Hawaii ) are endangered. 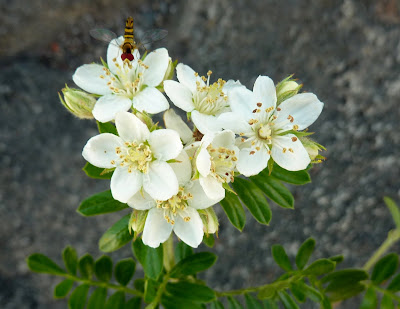 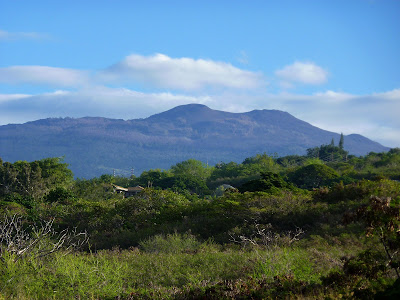 We'll have to wait and see if this storm, like many others, will weaken and dissipate before it gets this far south, but today was a clear day in Kona. The photo above was shot early this morning - the top of Hualalai from Keauhou. The semi-panorama below shows in the foreground the parking lot at the Kaloko-Honokohau visitor center, with Hualalai and Mauna Loa (right) in the background. Hualalai, let me remind you, is only the third highest peak on this island, but it's higher than anything in North America east of the Rockies. Click for larger view. 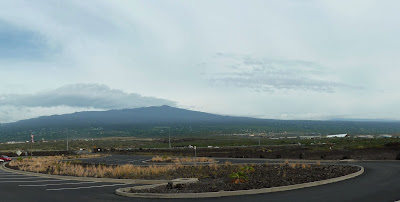 Yesterday Oceanic Cablevision's phone service was "down" for several hours. No dial tone, no calls coming in. We switched from Hawaiian Tel, or whatever they're called these days, about a month ago. 35 years of Hawaiian Tel, no service interruptions. One month (one goddamn month) with Oceanic and we get this.
Posted by John Powell at 10:36 AM 4 comments: